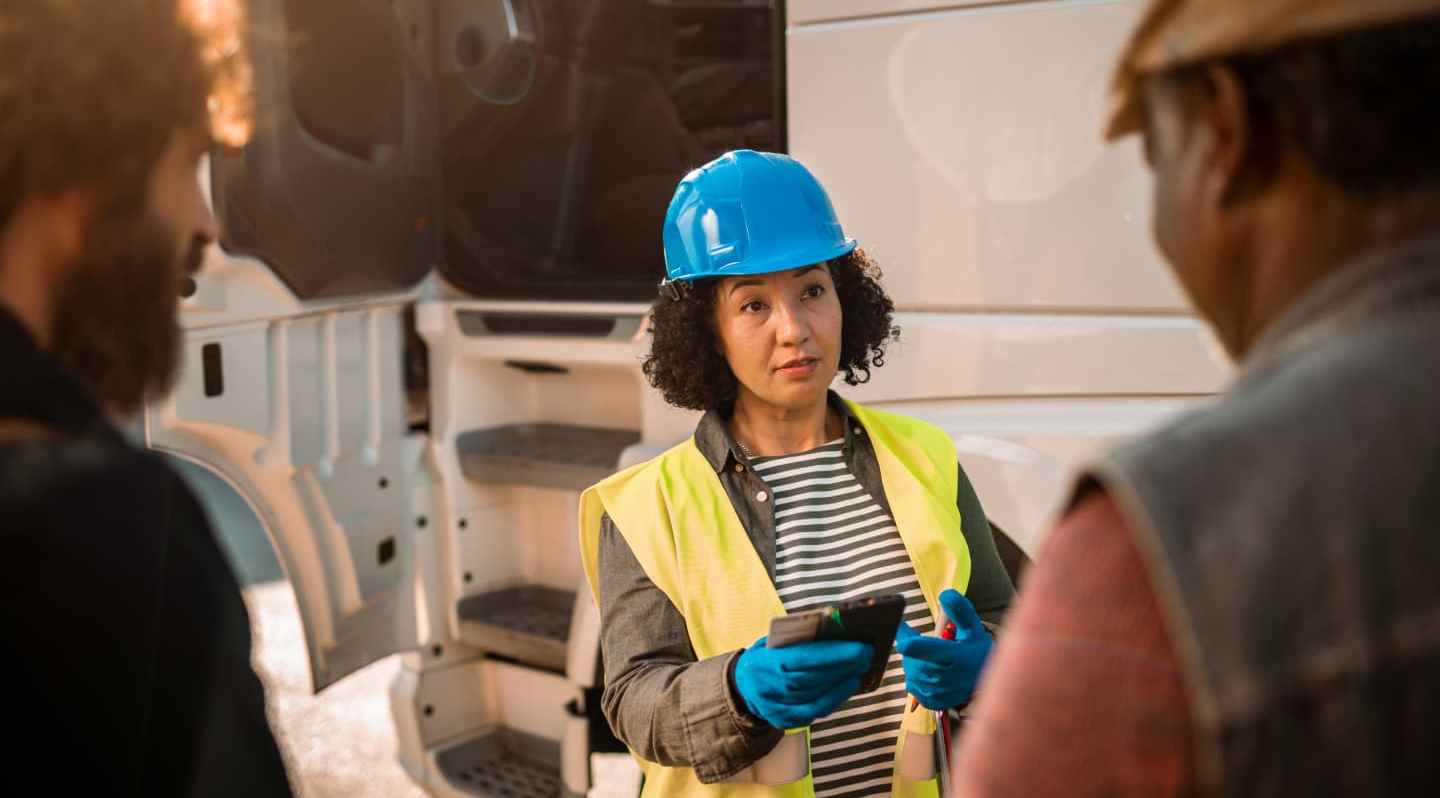 The Best Fleets to Drive For list has been released every year by CarriersEdge since 2008. Back when social media was new and drivers were logging hours of service in paper logs.

A lot has changed since then. And CarriersEdge, a company that focuses on driver training, has been helping drivers make informed training decisions along the way.

Those nominations were whittled down to 20 who have met the CarriersEdge standards of excellence.

What does it take to be counted among the Best Fleets to Drive For? We interviewed CarriersEdge co-founders Jane Jazrawy and Mark Murrell to find out. Here are 10 best practices that the best fleets of 2021 follow.

1. They care about empathy

This year required commercial transportation companies to think less about key performance indicators and more about the human factors that drive the business.

One fleet, for example, added an app to its phone system, scoring each phone conversation based on relative positivity. Another did the same with its mobile communications. How effective the techniques were remains to be seen,. But the fact that companies are considering workers’ feelings signals the companies’ understanding that satisfied drivers stick around.

Just as the best fleets are using technology in more innovative ways, they’re becoming more thoughtful about their content marketing. In 2021, podcasts became a tool of choice for fleets looking to communicate with drivers on the road.

“Podcasts are an efficient, personal way for fleets to stay in touch with the team,” Jazrawy says. “As fleets seek creative ways to engage drivers from a distance and keep the line of communication open, podcasts are becoming an important trend with lots of staying power.”

2021 data from “The Infinite Dial Report” reinforces Jazrawy’s stance. Forty-one percent of Americans surveyed said they had listened to a podcast in the last month, up from 37% in 2020 and a mere 9% in 2008.

“This growth goes to show that commercial fleets would be wise to use podcasts to get their message out and establish a dialog with employees,” Jazrawy says.

The best fleets don’t react to problems. They stay ahead of them. Where reactive companies begin damage control after an accident has occurred, proactive fleets take steps to prevent accidents from happening at all.

Long before others caught on, the best fleets used data-driven technologies to become safer and more efficient. As dashcams began to produce safer outcomes on the road, the best carriers continued to advocate for next-level safety innovations like the Motive AI Dashcam.

Through artificial intelligence and computer vision, the AI Dashcam reveals a driver’s level of awareness whenever an unsafe driving incident occurs.

Did the driver remove their eyes from the road? Were they reaching for something in the cab? AI Dashcams capture these high-risk driving habits on video, alerting drivers to them as they happen.

Motive’s event intelligence and in-house safety team then analyzes every video for you within seconds of the event to determine its context and severity.

Managers get prioritized videos with rich, actionable insights, and drivers are automatically coached on correctable behaviors when they complete their trip. And right from the Motive Driver App. Automated coaching helps to modify unsafe behavior before it leads to a collision.

4. They’re proactive on communication too

“Where reactive fleets wait for drivers to come knocking on a supervisor’s door, proactive fleets empower mid-level managers to address drivers’ concerns as they arise,” Murrell says. “Having that extra layer of communication between drivers and higher-ups ensures that concerns will be addressed in a timely manner.”

Murrell says that although the term “open-door policy” may sound like it’s part of a proactive culture, it’s actually an example of a reactive approach.

“Every fleet says they have an open-door policy, but I don’t think that’s necessarily true,” he says. “Saying ‘The door is always open’ is different from going out and saying, ‘What do you think is good and bad about this company and what should we be changing?’”

While some carriers prepared drivers for the pandemic by doling out hand sanitizer and reminding them to clean their trucks, the top 20 fleets did more.

“Several drivers were having mental health issues during the shutdown,” Jazrawy says. “When fleets took the time to make sure drivers were OK, it proved to be really important. We saw a big difference among the fleets that gave out supplies only, and those who followed up with drivers and asked how they were feeling.”

“Drivers stay at a company long term when they feel part of a family,” Murrell adds. “The fleets that found a way to make frontline workers feel connected during the shutdown were able to create a family vibe under very difficult circumstances.”

6. They use driver scorecards to improve performance

A driver scorecard provides a way of evaluating driver performance that is based on specific driving metrics. These might include speeding, hard braking, or close following.

Operations and safety managers can use driver scorecards to track high-risk behaviors and determine which drivers need coaching. Many companies categorize goals based on productivity, safety, or compliance.

Motive’s coaching workspace is similar to driver scorecards. Because it can be used to evaluate performance and identify trends among drivers.

Located in the Safety Hub in the Motive Fleet Dashboard, the coaching workspace automatically generates a list of coachable drivers and their high-risk behaviors. This helps fleet managers better understand which drivers need attention and which behaviors to coach them on. Without having to sift through individual events.

Companies don’t build diversity, equity, and inclusion (DEI) overnight. Fleets with the most impressive DEI track record in 2021 invested in their initiatives over several years.

American Central Transport, for example, has run a campaign called “I am ACT” aimed at attracting a diverse population of drivers. In the campaign, the company features videos of drivers of various ethnicities telling their stories in their own words.

When leadership is diverse, employees will be too. And not just racially diverse. In the commercial transportation industry, there’s been a surge in LGBTQ drivers.

“More and more, we’re hearing about trans drivers specifically,” Jazrawy says. “Fleets are always talking about the difficulty of attracting Millennials and Generation Z. Did you know that one in six Gen Z adults are part of the LGBTQ spectrum? And that 50% of them don’t think that gender is binary? Gen Z is very happy being on the spectrum. That will be the next big thing in the transportation industry, and fleets would do well to think of that.”

Many carriers use Facebook for recruiting. But only the best of the best turn to Facebook Live to have a conversation with drivers in real time.

When transportation companies use the platform to livestream meetings, it gives employees the chance to ask questions as the meeting unfolds. Even drivers who miss the live event can view the video later and leave questions or comments in the company’s Facebook feed.

“Not everyone is using Facebook to communicate with their teams, but they should be,” Jazrawy says. “With the conversations that take place through the live platform, fleets can gain insight into which issues drivers are concerned about and how satisfied they are.”

9. They use their own branded mobile apps

The mobile app landscape in 2021 focused on increased efficiency. And smartphones continued to serve as the central command center for drivers from the road.

“The difference is that fleets now brand their own mobile apps,” Murrell says. “They’ve created apps that integrate with driver scorecards or allow drivers to check payroll information, scan documents, and plan loads, all right from their fingertips.”

The Motive Driver App, for example, has a Documents Feature that lets fleets manage, customize, and share documents with drivers. All from one integrated platform.

Managers can upload documents to the Fleet Dashboard, customize forms, or use pre-built templates using a simple drag-and-drop interface. They can also share documents directly with drivers.

Drivers, meanwhile, can use the Documents Feature to upload multiple photos per document, capture electronic signatures on mobile, and share documents with fleet managers.

10. They use safety technology to reward positive behavior

Some of the best fleets use dashcam clips to recognize drivers for a job well done, and it sets them apart.

“The tendency of transportation companies to use dashcams to reward safe driving instead of only tracking unsafe behaviors struck us as a highly positive development,” Jazrawy says. “We expect more carriers to start implementing this practice in the future.”

The Motive AI Dashcam can be utilized to share and showcase exceptional acts of safety among drivers.

Capable of capturing 104 hours of continuously recorded video, the dashcam presents a proprietary DRIVE risk score that shows who’s enhancing your fleet’s safety performance. DRIVE builds a holistic understanding of your drivers’ performance, helping you put risks into context and focus on the most pressing issues.

With the added perspective that the DRIVE risk score provides, safety managers will ensure that top drivers will be rewarded for their good work and that others will be recognized for improvement.